The industrial use of equipment, utilizing OPTICAL RADIATION , is increasing day-by-day. The most common use is in the fields of communication, surveying, measurement etc .

Some of the most familiar forms of equipment using OPTICAL RADIATION  are as follows:

The most important field is that of communication where the high data transmission speed and immunity of transmitted signal to external interference are valued most.

In the Hazardous Area !

The optical radiation in the Hazardous Areas (potentially explosive atmospheres ) can ignite the surrounding atmosphere  and may result in explosion.

1. Optical Radiation is absorbed by surfaces or particles  and thus get heated up .Under certain (favorable) conditions this process may result in a sufficiently high temperature causing ignition of the surrounding atmosphere.

2. The WAVELENGTH of the  optical radiation matches with the ABSORPTION BAND of  a gas volume , initiating a THERMAL IGNITION.

3. Photochemical Ignition due to PHOTO DISSOCIATION of OXYGEN molecule by radiation in the ultraviolet wavelength range.

4. Direct LASER induced breakdown of the gas at the FOCUS of a strong beam, producing PLASMA and a SHOCK WAVE , both eventually acting as the IGNITION SOURCE. These processes may be supported by a solid material close to the breakdown point.                 (IEC 60079-28)

The Domain of OPTICAL RADIATION

How to assess Ignition Hazard related to Optical Radiation

An easy Assessment Method is given in IEC 60079-28 as Annex C . The outlines are as as follows: 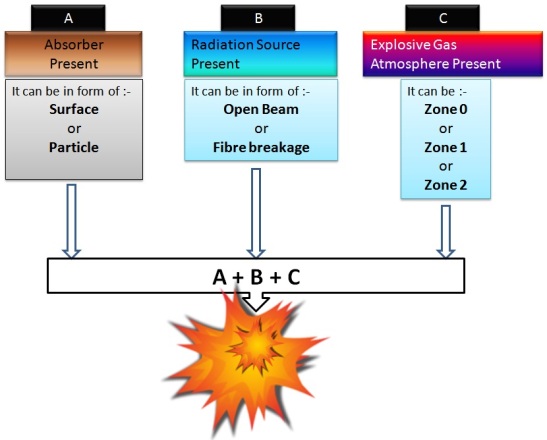 Application of types of protection for optic systems based on EPLs