A haunting question. Is it a dilemma  or a  complete solution

….does it require the NEC-IEC vision…

Let us see… We will use the following picture as a symbolic representation of this situation. 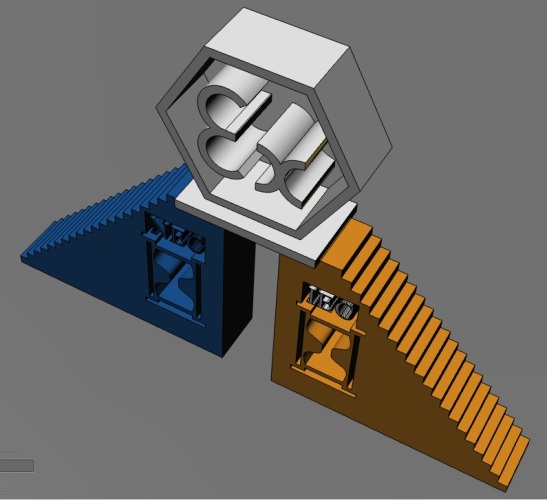 Two tracks , of different colors ,operated by two different protocols but leading to the same destination, which in our case is the Safe Operation of the Electrical Equipments in the Hazardous Area .By same analogy Explosion Proof & Flameproof are the two most commonly used  Hazardous Area Protection Techniques.

1. To keep the insides isolated from the outer Hazardous  Atmosphere

2. If there is an ingress of outer explosive atmosphere resulting in an explosion inside the box , the products of the explosion , namely, the high pressure, the fire,the smoke the hot gases and the debris remain inside and is allowed to escape through (Not the over-pressure value ) the joints .(The joints between the lid and the enclosure , the conduits and the enclosure )

This was being done (at least) at two places in the world .

We will bypass the normal flow of history and land in 1957.

With the term Ex d comes the definition , as follows:

Now consider the definition of the Explosionproof

In designing explosionproof equipment, it is assumed that the flammable gas or vapor will enter the equipment enclosure and be ignited by a spark or arc within the enclosure.  The threaded joints provided by rigid metal conduit and intermediate metal conduit are not gas-tight, so the gas can enter around these threads.  In addition, all electrical equipment intended to be connected to a wiring system has a removable cover of some kind to permit wiring and facilitate repair of the electrical parts. Some equipment has external shafts to permit operation of internal switches or, as in motors, to transmit mechanical motion through the enclosure.  The gases can enter through the interface between the removable cover and the remainder of the enclosure, or through the shaft and body interface.  These interfaces are called “joint surfaces,” or just “joints” and are commonly referred to as “flame paths”.

The following common parameters are obvious:

1. STRONG Enclosure . Strong enough to withstand the internal pressure of the explosion.

2.Special Design of the enclosure to isolate the effects of the internal explosion and not to transmit any of the effects to the outer surrounding atmosphere.

3. The JOINTS  or the interfaces are , however, specially designed to control the expanding hot gases in such a way so as to cool them and quench the flame before letting some of the them escape through the “FLAME PATHS”. A flame paths is  always long in proportion to its width.

It is the Maximum gap of a joint of 25mm in width which prevents any transmission of a explosion during TEN  (10) tests made the conditions specified in IEC 60079-1-1.

At this point let us examine the commercially available “Explosionproof ” & “Flameproof” enclosures.

Both the enclosures are made of the same alloyed material and by the same manufacturer.

Now let us use the NEC-IEC vision to finally get the clarity.

There is no difference between the Explosionproof & Flameproof as far as following points  are concerned:

a. The underlying Philosophy

b. The magnitude of the embedded safety

Empty Ex d Enclosures are available in the market.

An enthusiastic (not-so-Ex-PERT)  person (like me) may have this temptation of purchasing an empty Ex d Enclosure and ‘making ‘ a junction box or a control-station by installing industrial type electrical components for operating it in a classified Hazardous Area.

So what is wrong with this ECONOMICALLY BENEFICIAL PRACTICE?

(See the details below )

·         You can carry out the installation of components

BUT You CANNOT take your designed terminal BOX into a Hazardous Area and ENERGIZE it.

Because you are NOT ALLOWED by the Hazardous Area Protection laws

Just check the Certificate; it will have the following form

Furthermore the Ex d enclosures are expected to withstand the explosion-generated pressure of the Assembly of the components installed in it. This scenario can only be tested inside the factory or the certifying body.

The Official way is to give details, to the manufacturer, of all the components to be installed inside the enclosure and let them do the designing , manufacturing and testing for you.

So what is the use of the U certified enclosure?

Actually these empty enclosures with component certificates are not intended for the end -users , in fact they are for other manufacturers to install their products and then apply for  full equipment certificate , by-passing some or most of the type tests.

Furthermore , since the production process is already being monitored for the empty enclosures for quality assessment, the third party is assured of the safety of the purchased enclosure

Reference to IECEx OD 017 is worthwhile here.This Operational Documents lists the documents & drawings to be submitted by the manufacturers to the Ex testing laboratories when applying for certification.

For the Flameproof Enclosures d (Flameproof because we are using IEC) , some of the details to be shown in the submitted drawings includes :

Area in which cable entries , switch operators , windows, receptacles etc may be fitted

Layout and heat dissipation of internal component showing location and approximate dimensions of each component, including clearances between components and the nearest sidewall. ( The purpose is to control)